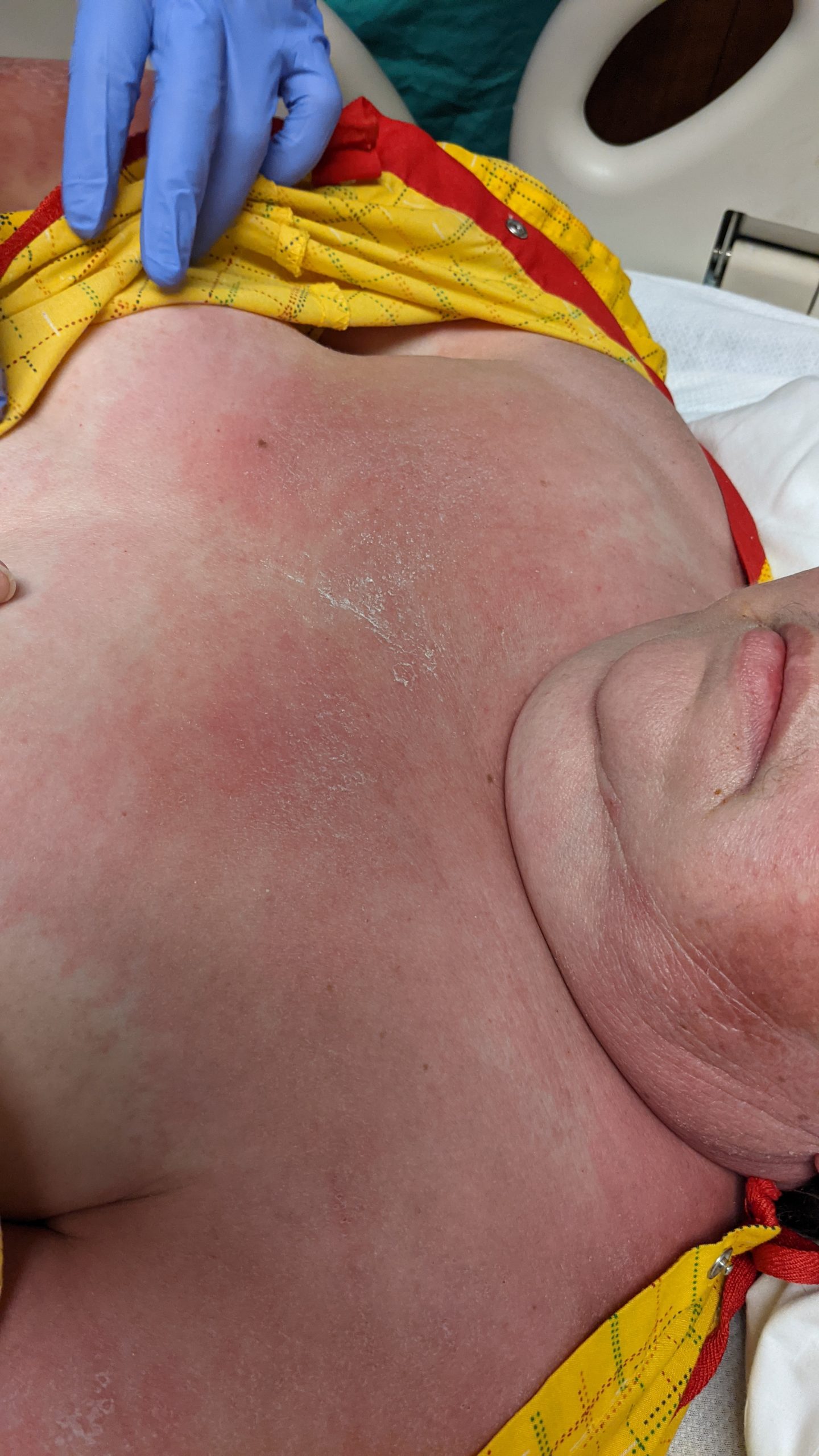 A 53-year-old female with a past medical history of type 2 diabetes and hypothyroidism presented with a 3 week history of a pruritic eruption affecting the face, upper extremities, chest, back, thighs, knees, and toes. Physical inspection revealed the following findings (Figure 1a-c).

Which of the following co-morbidities is most often associated with the patient’s diagnosis?

This patient’s clinical presentation, which includes heliotrope rash (periorbital erythema with edema, occasionally involving the cheeks and nose), Holster sign (symmetric poikiloderma of the lateral thighs below the greater trochanter), and V-sign (confluent erythematous patches over upper central chest and lower anterior neck) is highly suggestive of dermatomyositis. Dermatomyositis (DM) is an inflammatory myopathy with autoimmune pathogenesis affecting women more commonly than men, with a bimodal peak of incidence between ages 5 and 14 and ages 45 and 65.1-2 Dermatomyositis is sub-classified into adult-onset disease and juvenile disease (JDM). Serum antinuclear autoantibodies are often present, as are other myositis-specific autoantibodies, which are useful as prognostic indicators while aiding in diagnosis and management of disease.1-2 Dermatomyositis is related to and possibly results from an immune-mediated process triggered by outside factors like drugs, infectious agents, and malignancy in individuals with genetic predisposition.1-2

A recent meta-analysis demonstrated that patients with DM are at 4.66 times increased risk for malignancy as compared to the general population, which is more than double the risk observed in polymyositis patients.4 JDM is not associated with increased malignancy risk.1 Specifically, both Anti-TIF1 and Anti-NXP2 antibodies are associated with malignancy in adults.2 Many malignancies are associated with dermatomyositis, most commonly ovarian cancer (A) and gastrointestinal malignancies, along with nasopharyngeal carcinoma, breast cancer, lung cancer, pancreatic cancer, and non-Hodgkin’s lymphoma.1,3 Patients newly diagnosed with DM should be evaluated for malignancy, as cancers are often detected within 1-2 years of DM diagnosis.1-4

Autoimmune thyroid disease (B) results in a number of associated dermatologic manifestations. Patients with Graves’ disease have characteristic cutaneous findings of hyperthyroidism, such as warm, smooth skin, hyperpigmentation, diffuse alopecia, palmoplantar hyperhidrosis, facial flushing, and thyroid dermopathy, as well as clubbing and onycholysis.1,5 Pretibial myxedema and exophthalmos may also occur.1 Hypothyroidism, which may result from Hashimoto’s disease, may be associated with coarse, rough, dry, pale or yellow pigmentation of skin, generalized myxedema, brittle and coarse hair, madarosis, hypohidrosis, as well as onycholysis and brittle nails.1,5 Although autoimmune thyroid disease may co-occur with autoimmune dermatologic disease, including well-described associations with alopecia areata and vitiligo, there are only sparse reports of co-occurrence of DM and autoimmune thyroid disease in the literature.6 Thyroid cancer may co-occur with DM, albeit at a lower rate of association in comparison to the association between DM and ovarian cancer.7

Type 2 diabetes (C) results in a number of dermatologic manifestations related to insulin resistance, such as acanthosis nigricans, acrochordons, diabetic dermopathy, and eruptive xanthomas.8 Type 2 diabetes also has a well-described association with psoriasis, as part of the metabolic syndrome, as well as necrobiosis lipoidica, which rarely affects both type 1 and type 2 diabetics but does so almost exclusively.9,10 There is no robust evidence to date to suggest a similar association between DM and type 2 diabetes.

Patients with DM may develop interstitial lung disease (ILD), which is more commonly associated with the amyopathic variant of disease and Anti-MDA5 antibodies.1,2 Acute onset and rapidly progressive ILD along with constitutional symptoms, Raynaud’s phenomenon, mechanics hands, non-erosive arthritis may be associated with anti-synthetase syndrome.1,2 Only several reports of DM-associated ILD complicated by pneumothorax (D) have been published to date.11 Pneumothorax may occur in association with Birt-Hogg-Dubé syndrome, which results from Folliculin gene mutation and is associated with cutaneous findings including fibrofolliculomas, trichodiscomas, perifollicular fibromas, and acrochordons mostly involving the head and neck.1 In addition to pulmonary cysts, which can lead to spontaneous pneumothorax,  other systemic manifestations include medullary thyroid carcinoma renal carcinoma.1

Renal cell carcinoma (E) is less commonly associated with DM in comparison to ovarian cancer.1-3 In addition to Birt-Hogg-Dubé syndrome as previously mentioned, Reed’s syndrome confers an increased lifetime risk of renal cell carcinoma (15%) in patients as well, and is associated with dermatologic manifestations including multiple cutaneous pilar leiomyomas and uterine leiomyomas.1,12 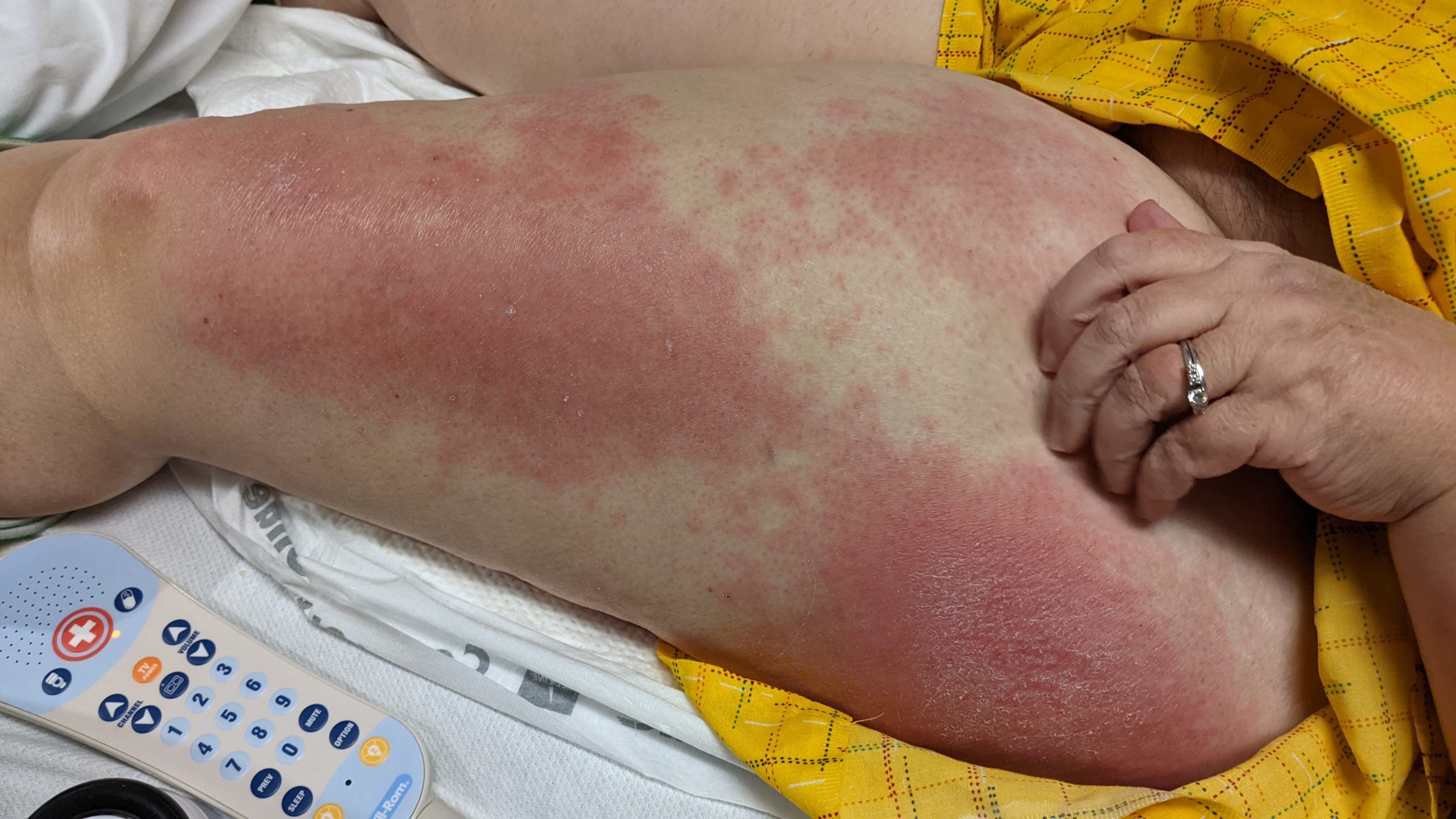