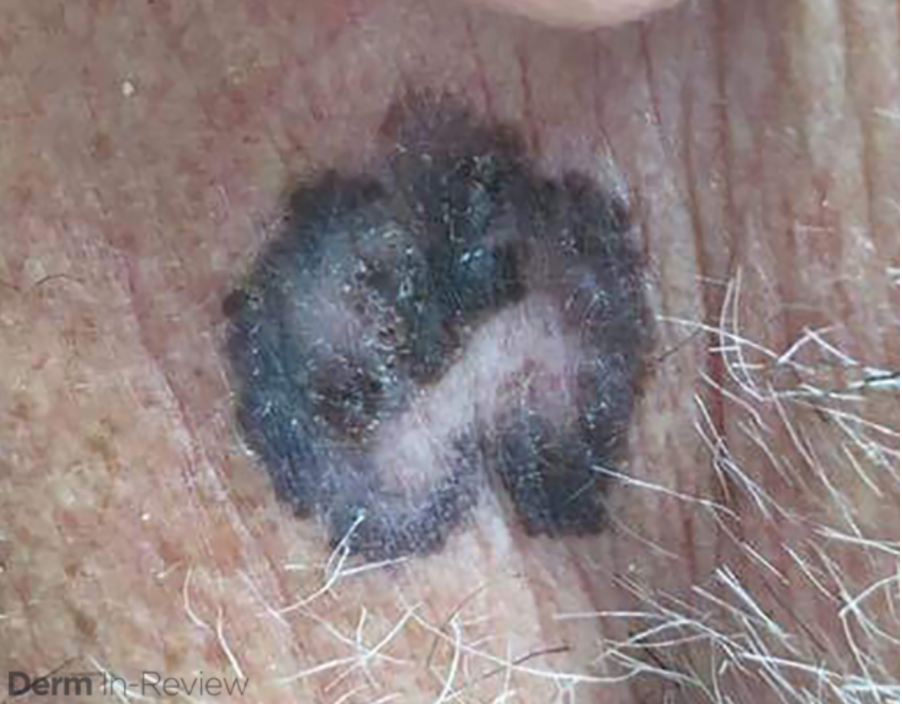 A 63 year old male with a history of dysplastic nevi and extensive sun exposure presents to clinic with a six month history of a discolored dark brown to black plaque on the postauricular scalp. He reports associated itching and spontaneous bleeding. Biopsy reveals a 3.0mm thick ulcerated nodular melanoma with a foci of regression. Sentinel lymph node biopsy demonstrates 2/14 nodes positive for melanoma. Genetic testing reveals a germline mutation in CDKN2A.

Which of the following is correct regarding the function of CDKN2A?

A) Correct: CDKN2A encodes p16, a recognized tumor suppressor gene that induces a G1 cycle arrest by inhibiting the phosphorylation of the Rb protein by the cyclin-dependent kinases CDK4 and CDK6.1
B) Incorrect: CDKN2A encodes p14, which binds to MDM2 and stabilizes p53, a tumor suppressor.2
C) Incorrect: This describes the MAPK pathway, which regulates cellular proliferation, growth, and migration via binding of growth factors to a receptor tyrosine kinase.1
D) Incorrect: This describes PD-1 (programmed cell death protein). Interaction of PD-1 with its ligands PD-L1 and PD-L2 promotes apoptosis of tumor antigen-specific T cells and reduces apoptosis in regulatory T cells. 1
E) Incorrect: This describes BRAF, a serine-threonine kinase in the MAPK pathway. 3

Melanoma is a malignant tumor that arises from melanocytes. It is most commonly cutaneous in origin, but can also arise on mucosal surfaces, in the uveal tract of the eye and in the leptomeninges.1 Genetic mutations in melanoma often affect signaling pathways that can ultimately lead to cell-cycle dysregulation and resistance to apoptosis. Key among these pathways are the MAPK signaling pathway, which involves a growth factor binding to a receptor tyrosine kinase (such as KIT). This initiates a signaling cascade that requires the GTPase activity of NRAS and the kinase activity of BRAF, MEK and ERK.1 30-40% of acral and mucosal melanomas have a mutation in KIT, 15-20% of melanomas overall have a mutation in NRAS, and 50-60% have a mutation in BRAF.1 Another important signaling pathway in melanoma is the PI3K signaling pathway, which regulates cell survival, growth and apoptosis.

Cyclin-Dependent Kinase Inhibitor 2A (CDKN2A) is a gene that encodes several proteins, the most well known of which are p16 (INK4A) and p14 (ARF). Specifically, p16 induces a G1 cell cycle arrest by inhibiting the phosphorylation of the retinoblastoma (Rb) protein by the cyclin-dependent kinases CDK4 and CDK6. ARF, or p14, binds the p53-stabilizing protein MDM2. When active, p53 leads to cell cycle arrest and apoptosis.2 25% of patients with familial melanoma have germline mutations in CDKN2A.4 Understanding melanoma oncogenesis is key to developing therapeutic strategies and oncogene-targeted therapy.