By Krista ReznikFebruary 20, 2022 No Comments 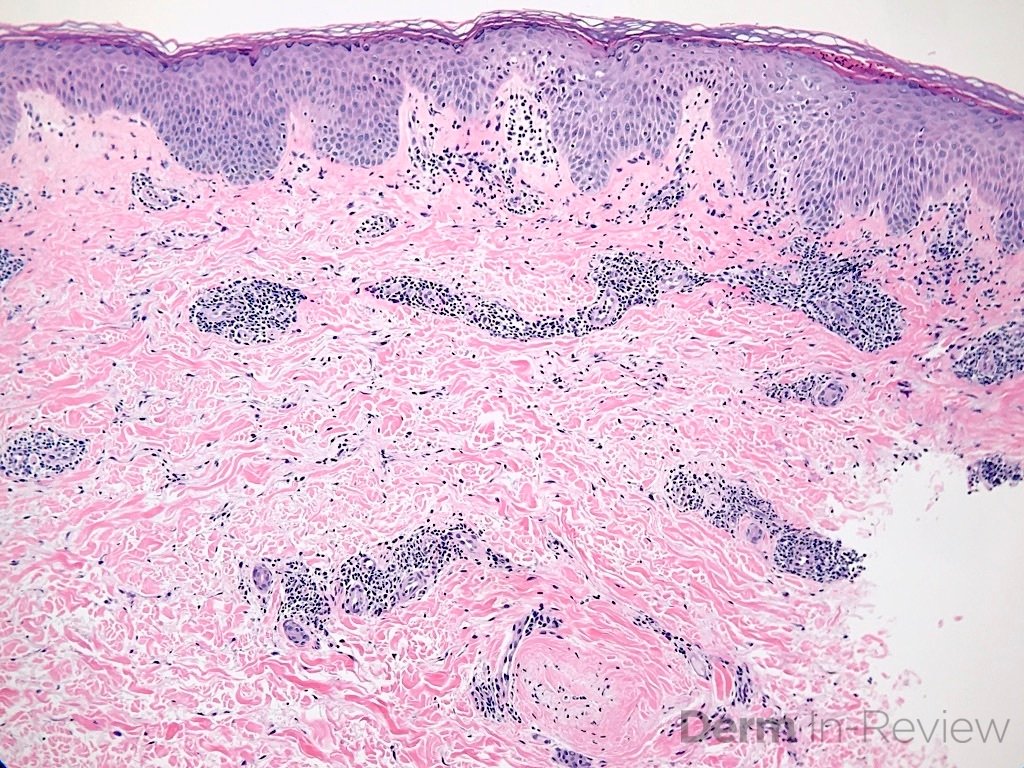 A 42 year old female with no significant past medical history presented to clinic with complaints of a new itchy rash on her upper back. She states rash began as small lesions several weeks ago that have rapidly and progressively expanded. Physical exam revealed several erythematous annular plaques with central clearing and fine scaling arranged in a serpiginous distribution. Histopathological examination revealed acanthosis, mild spongiosis and a dense “coat-sleeve like” lymphocytic perivascular infiltrate with intact vessels. Based on clinical history and biopsy findings, a diagnosis of erythema gyratum repens (EGR) is made.

Which of the following is FALSE about this condition?

A.) The associated scale is typically found on the “trailing” edge of the lesion
B.) Lesions typically grow at a rate of up to 1 cm per day
C.) EGR is considered a paraneoplastic syndrome with hematologic malignancies being the most frequently associated neoplasms
D.) Direct immunofluorescence may reveal IgG and C3 deposits in the basement membrane zone
E.) Treatment of the underlying associated condition or removal of the offending agent appears to be the most effective treatment

Correct answer:  The statement in answer choice C is FALSE making this the correct answer. Erythema gyratum repens is considered a paraneoplastic syndrome, however, it is most often associated with lung cancer.

Erythema gyratum repens (EGR), also known as Gammel disease, is a rare figurate erythema often considered to be a paraneoplastic syndrome. EGR is characterized by rapidly-migrating, annular erythematous plaques with a collarete-type fine “trailing” scale (answer A). Lesions typically advance at a rapid rate of up to 1cm/day (answer B) and form serpiginous band patterns arranged in parallel configuration. Given its concentric ring pattern, it is often described as having a “wood grain” appearance. This condition is typically intensely pruritic and usually affects the trunk and proximal extremities, while sparing the face, hands, and feet.

EGR was originally considered to be exclusively a paraneoplastic syndrome, as it can be associated with malignancies up to 80% of cases.1 The most frequently reported associated neoplasm is lung cancer (answer C), followed by esophageal, gastric, and breast carcinomas. There have been reports of other associated malignancies including renal, bowel, bladder, anal, cervical, pancreatic, prostate and tongue carcinomas, Hodgkin’s lymphoma and myeloma.2,3 EGR typically develops several months before the diagnosis of an underlying malignancy but may also occur concurrently with or months after diagnosis. This strong association warrants performing a thorough review of systems and conducting any appropriate cancer screenings. Less frequently, EGR may be idiopathic or develop in association with other inflammatory or infectious disorders such as rheumatoid arthritis, CREST syndrome, Sjogren Syndrome, pityriasis rubra pilaris, psoriasis, bullous pemphigoid, ichthyosis, and most recently COVID-19 infection 4-11. It may also be associated with the use of certain drugs such as azathioprine and pegylated interferon alpha. 12,13

The pathogenesis of EGR is unknown, but an immunological pathological mechanism is suspected, possibly due to cross-reaction of tumor antigens with cutaneous antigens. Histopathology of EGR is non-specific and resembles that of other gyrate erythemas, with findings such as focal parakeratosis, mild hyperkeratosis, acanthosis, “coat-sleeve” perivascular lymphocytic infiltrate and eosinophils in some cases. Direct immunofluorescence revealing IgG and C3 deposits at the basement membrane zone has been reported (answer D).14

The use of various topical and systemic immunosuppressants, retinoids, and antihistamines has been reported with limited success. Ultimately, eradication of the underlying malignancy or other associated disease process seems to be the most effective treatment for EGR.15